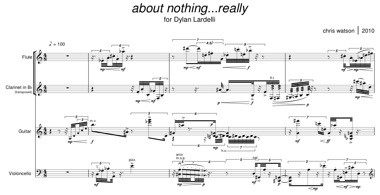 This work was conceived in the abstract and does not relate to human experience. It does not illustrate the composerÂs state of mind, he having suddenly found himself awake in the middle of the night, unable to control his thoughts. While the experience of insomnia, especially when suffered over consecutive nights, can be physically and emotionally crippling, at times the abundance and insistence of multiple streams of unwanted thought (unruly Beta waves) can be, if not pleasurable, then certainly fascinating. This piece does not seek to illustrate this through music, nor does it sonically pose this question: why does the brain seize control of the consciousness and produce such a plethora of unwanted activity that sleep is made impossible and the host becomes miserable?

At times, certain thoughts seem to somehow rise above the melee of insomniac thought and become quite focused and of seeming import, however inane these might seem in the cold light of day. This is not portrayed in the music by infrequent parings-down of texture and emergence of single, insistent motivic ideas. The music doesnÂt describe how such thoughts soon get swallowed up as the jumble of thoughts returns and the victim adjusts position once again, glancing desperately at his or her clock radio and resolving hopelessly to try to make yet another attempt at deep breathing and sheep counting work.

The composer could claim that the work is about these things, but that would be a lie; he no longer wishes to construct programme notes after the act of composition that conform to some conceivable extra-musical agenda.

This version of this work is the first of a number of versions, with another swapping cello for viola and another as a solo guitar piece currently projected.

The work was requested by Dylan Lardelli and is dedicated to this increasingly mythic musician.