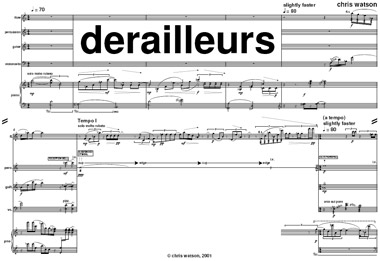 
programme note: The derailleur is the piece of bicycle componentry that crudely knocks the chain from one sprocket or chain-ring to another, resulting in a higher or lower gear. The sensation experienced on a rider's first encounter with the derailleur is strange: one finds oneself pedalling more or less to cover the same distance, but, once one is aware of the derailleur's benefits, one has greater control over gradient, surface and the elements.

The derailleur is directly analogous in music to the phenomenon of metric modulation, a device pioneered in complex forms by Elliott Carter. In derailleurs, metric modulation is used in tutti passages to express ritardando and accelerando with a jumpy, cog-changing precision. Solo sections stand in contrast by allowing individual players the freedom to impose their own subjectivity on the concepts of slowing down and speeding up.