programme note: Edgard VarÃ¨seÂs Octandre (1923) is arguably not trademark VarÃ¨se: missing are the menacing batteries of percussion that punctuate most of his important works. While the challenging idÃ©e fixe rhythmic unisons of works such as Ionisation are in evidence, in Octandre, melody is also to the fore. The work is, to my ears, both clinical and expressive, and, after umpteen listenings, it remains modern and fresh. It is the one work above all others that I go to when seeking inspiration. So, as a means of perhaps peeling back a few layers of mystery surrounding Octandre and also as a way of demonstrating my gratitude to it, I have written this homage, using VarÃ¨seÂs same instrumentation and three movement structure. 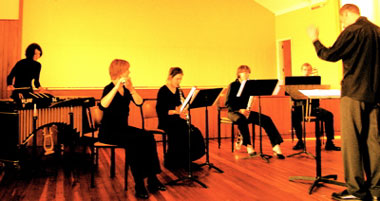