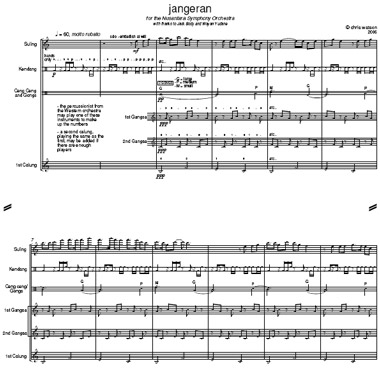 programme note: jangeran was commissioned by the Nusantara Symphony Orchestra ostensibly for on-tour performances in Tokyo and Osaka as part of the Asian Orchestra Week 2005. Essentially a fairly obviously shaped and simple elaboration of a supplied Balinese melody that is made to cross between orchestra and gamelan ensemble, the real story of jangeran is not in its East-West musical treatments, but in the nature of the East-West exchanges between orchestra and composer behind the scenes.

Though it is one of his most-performed works, the composer has never been supplied with a recording and was unaware until after the fact that the work had been performed as "part of a medley", and sometimes with dancers and choral parts added. The work was also, at one time, subject to a dispute (resolved) over artistic ownership.

These grievances have given way to a general fascination (on the part of the composer) with the differences in preconceptions and expectations of people from different cultures.