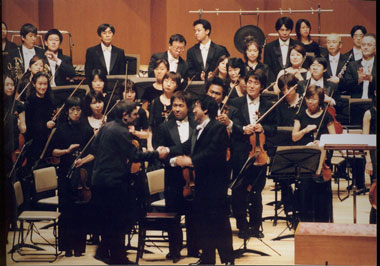 
programme note: Pivotal Orbits I was influenced by the sensual imagery of the following passage in Henry Miller's Tropic of Cancer:

The earth is not an arid plateau of health and comfort, but a great sprawling female with velvet torso that swells and heaves with ocean billows; she squirms beneath a diadem of sweat and anguish. Naked and sexed she rolls among the clouds in the violet light of the stars. All of herÂblazes with furious ardour. She moves amongst the seasons and the years with a grand whoopla that seizes the torso with paroxysmal fury, that shakes the cobwebs out of the sky; she subsides on her pivotal orbits with volcanic tremors.

This work is a portrayal of this tectonic restlessness and movement, existing in a lush sound environment, tied together by three recurring ideas that are in constant developmental flux.