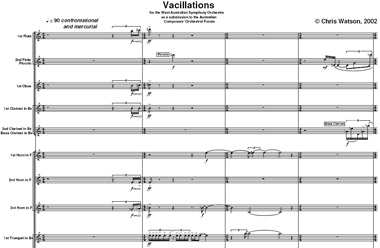 programme note: As the title suggests, this piece is about a constant wavering in purpose and intention, where ideas vie for a foothold in an ever shifting aural vista. Crudity wrestles with elegance, liquid horizontalism explodes out of and is then impeded by block verticalism, grand string-centred explorations are effaced and undermined by lightly scored, fragmentary material, seemingly stable colour palates are suddenly infiltrated by waves or blobs of contrasting timbres...

I was very interested in exploring in some small way the huge array of sub-groupings of instruments within the orchestra, and I sought to elevate these chamber groupings to the same level of importance as the entire body of resources used simultaneously. The most obvious example of this is the frequent use of the string quartet (ie, the lead players of each string section, minus the basses) as both a timbral paring-back of the strings as a whole and a sovereign expressive force in its own right. In considering the orchestra in part as a large chamber group, many individual lines assume, in isolated areas, concerto-like duties and characteristics, where their solo outbursts are supported by burbling, decorational accompaniments.

Only towards the end does a single rhythmic idea (a simple driving moto perpetuo) sustain a platform around which previously antagonistic colouristic and textural devices are able to mingle happily before a final decay of order and a brief, evaporating coda.

Vacillations was written as Chris's contribution to the Australian Composers' Orchestral Forum (ACOF), an opportunity made possible through the collaboration of the Centre for New Zealand Music and the Australian Music Centre. Under the scheme, Chris travelled to Brisbane for tutelage with Gerard Brophy and then to Perth for further coaching from Roger Smalley and Brenton Broadstock (pictured) and to rehearse with the West Australian Symphony Orchestra and conductor Kevin Field.